Foregrounds can present a particular problem to many painters, regardless of what is painted there. This critical area can trouble professional artists and students alike. The foreground must function to support the subject of the painting and not distract the viewer’s eye.

Nothing distracts more than a weak, disruptive composition that allows the eye to meander, fixing on nothing and going nowhere. Instead, a strong foreground will lead clearly and succinctly to the focus of the painting, with enough detail to enhance that subject. A weak foreground can destroy the effectiveness of a painting that is otherwise successful. No matter how strong or visually delightful the center of interest, if attractive elements in the ground plane lead the eye away from it, the painting becomes disjointed and uninteresting. If, on the other hand, the ground plane is a bland sea of useless, rambling details, or is so devoid of information as to be visually boring, this area simply fails to do its job.

The fore is often the place where distractions occur. Because the greatest color, contrast and detail reside at your feet, it is necessary to walk a fine line between enough and too much if your center of interest does not reside there. Excessive detail can overburden the senses, heightened darks and lights may attract unwanted attention and strong color might appeal to the eye when it is not meant to be the center of interest. The solution is to take into consideration this key area and arrange the various components in the fore to direct the viewer’s eye, moving it quickly or slowing it momentarily, or perhaps allowing it to rest briefly in an area of quiet calm before moving on. The rhythm and syncopation of this movement is important and allows you to vary the tempo, pace and direction the eye moves.

Think about how you can use the fore to guide the viewer’s attention to the focal area (it may not be just a focal point but a grouping of items) and keep it comfortably centered there. Allow your viewer to arrive at the focal area, providing a visual pathway of some sort. This might be as simple as a trail of light that leads the eye through the foreground, or it could be as obvious as a paved highway with a yellow stripe curving across the land, pointing like an arrow to the center of interest.

It is sometimes tempting to minimize any foreground, cropping the image so that the offending or difficult part is simply cut out. This can often leave the subject sitting directly on the “windowsill” of the painting with no room to travel visually to the subject. While cropping might seem a simple solution, it actually contains pitfalls of its own since the need for excellent composition is often then increased. Instead of cutting out the offending portion, consider utilizing the space to strengthen the painting. The abrupt quality of the painting that is merely a subject and background, with no intervening sense of space, can be confusing. While this composition may be effective and interesting when done by a master painter, it’s not a solution you can rely on for every painting.

Far more often you want to use shapes to give mood and movement to the work, making the foreground a vitally important and motivating part of the composition, an appealing and lively portion that does not distract. Compose with two key ideas in mind: Create depth and keep the movement operative.

There are many elements you can include in the foreground plane to create distance and movement. Consider including a vertical element such as a tree or bush, telephone pole or fence to enhance the illusion of distance. When a vertical object protrudes into the more distant planes above, it functions much like a puzzle piece, locking the composition together in relation to the foreground. 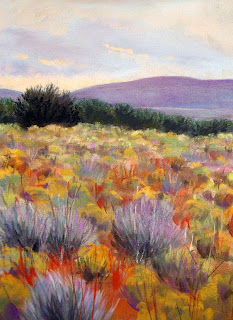 A streak of light and the shadow it casts can draw the eye and change the direction it moves. Overlapping grasses and bushes, large and small, can make a soft transition. Strongly contrasting colors or values, such as a patch of snow or brightly colored flowers, can entice the viewer. A change in plane where the ground rises or falls away can move the eye swiftly or slowly in another direction. Lost and found edges become important in pointing the eye, making a soft or abrupt shift.

Strong verticals create upward or downward movement and horizontals move the eye side to side, while angles can provide transitions between them. The place where these directional elements intersect can be critical. Pay close attention to the X or Y where they meet and maintain the movement in the proper direction.

Be sure to use patterning. Look for the repeated overlapping colors and characteristic shapes found on the ground, such as low-growing grasses, small bushes, flowers, weeds and dirt.

Rather than laboring to paint every detail of grass and leaf, use repeated patterns that are somewhat larger in the immediate fore and become progressively smaller. In the distance these strokes, laid down like tweed cloth with dashes of characteristic color, create a simple texture with muted color that explains enough without saying too much. Oftentimes patterning is the key to solving foreground dilemmas simply because it creates an illusion or suggestion of detail without becoming disruptive.

Keep in mind that the slight graying or bluing of aerial perspective is needed to add to the illusion of depth. The colors in the immediate foreground will be the most saturated, yet there will be times when you must mute them slightly so that they do not compete too much with your focal point.

Conversely, injecting strong color into the foreground can enhance perspective. Remember that as colors recede from the eye there is a color shift as increasing layers of air filter out first yellow and then red. This means that as you look out over a large field those grasses at your feet will have all of the combinations of red, yellow and blue in them, as well as holding the strongest contrasts of dark and light. As the grasses recede into the mid-distance they will first become somewhat less yellow, leaving mixtures of red and blue, resulting in a lavender hue. If the field is large enough, red will slowly be filtered out in the great distance, leaving a pale blueness to the grasses farthest away. (See CHAPTER FIVE -- AERIAL PERSPECITVE)

In fact, at its simplest, the landscape could be expressed according to the rules of aerial perspective as the yellow of the foreground, the lavender of the mountains and the blue of the sky. This formula actually works quite well to express minimally the land and sky. 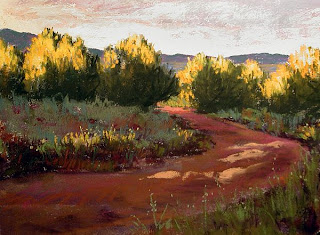 A few ways to break up a foreground include:

• a vertical bush or tree

• a change in plane

• a streak of light

• a reflection in a puddle

• a road or pathway

• a river or stream

• other interesting shapes or colors

Don't let your foreground be so empty that it looks unresolved. Suggest things, even if you don’t describe them. Don’t be unwilling to add elements to the foreground to move the eye, recomposing to strengthen the painting. 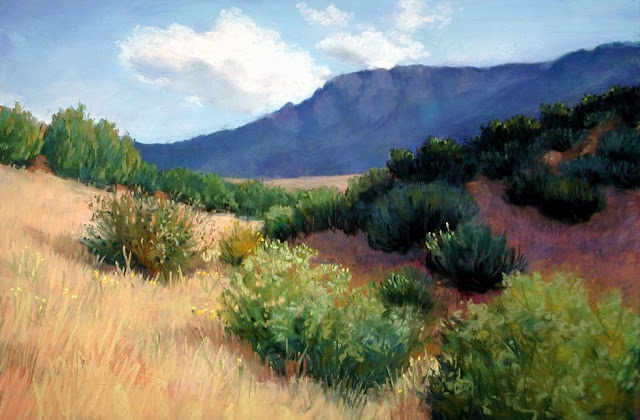 You may also use one of the eBook platforms (such as www.bloxp.com) to make a one-off eBook, which may be downloaded in any electronic format you wish for your own personal use.
Please don't copy and post it online anywhere without my express, written permission. (debsecor (at sign) gmail (dot) come) Instead, please use a link to the chapter you want to share. Thanks so much for understanding.